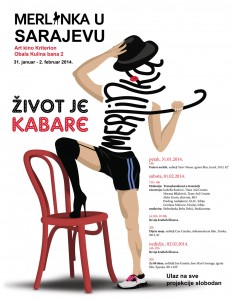 WNBiH condemns the attack against the international queer film festival “Merlinka” that took place on Saturday 1 February, at cinema Kriterion in central Sarajevo. Shortly after the opening of the second day at the festival, reportedly a group of 12-14 masked men violently entered and interrupted the festival injuring two men and one woman.

The event was announced to the police and the police of the MUP Sarajevo Canton was invited to be present at the time of the activities on the premises where the festival was held, however, police arrived late, when the attackers already withdrew.

This is another sad example of the vulnerability that the lesbian, gay, bisexual, transgender (LGBT) community faces and the discrimination they encounter throughout Bosnia and Herzegovina when trying to exercise their rights to freedom of assembly and expression.

We urge the authorities of Sarajevo Canton to promptly and thoroughly investigate the attack against festival “Merlinka”, and bring those responsible to justice. The alleged motive based on sex, gender and sexual orientation should be duly taken into account in the prosecution phase and be adequately reflected in the sentence.