Misogyny has a reason to be afraid for it self 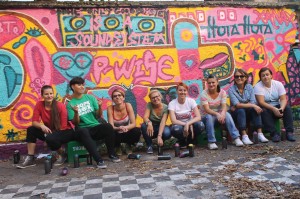 Text taken from the magazine BH Dani, feature: Her 5 minutes

Full text only available in B/H/S languages. You can read it here.

PitchWise 2014, a festival of women’s art and activism

The 9th PitchWise Festival of female art and activism was held from September 11th to September 14th in Sarajevo. As the only festival of this type in BiH, this year’s events have offered one of the best programs so far. Festival lasted for four days and included workshops, exhibitions, movies, but also opened the discussions about important issues regarding women’s rights.

The festival opened with the promotion of the book “Women Documented – Women and Public Life in Bosnia and Herzegovina in the 20th Century“, on Thursday, September 11th, at the Museum of Literature and Theatre Arts. The book is a project of the Sarajevo Open Centre and its partners, and it deals with women in the artistic, political, scientific, activist, cultural and other spheres of public life. The authors of the book are Amila Ždralović, Aida Spahić, Bojana Đokanović, Arijana Aganović, Elmaja Bavčić, Emina Žuna, Ivana Dračo, Zlatiborka Popov-Momčinović, Fabio Giomi and Zlatan Delić, while Jasmina Čaušević was the ditor in chief. As it was said in the preface, the book is primarily an activist response to the systematic neglect of the contribution of women to Bosnian culture and represents an attempt to provide a sketch of the history of the study of women in the country. In addition, the book has two objectives. The first is to create a base that will be a place to contain both new and existing knowledge, while the second is related to interconnection and creating a network of people who are already engaged in women’s issues and the ones that are not.

Another one of the feminist events, the lecture series “Somebody said feminism?”, also found its place in this year’s PitchWise, and this time the topic was Labour and social rights – feminist strategies and analysis. The two-hour discussion was moderated by Davorka Turk (Center for Nonviolent Action, Sarajevo/Belgrade).

“I think this year’s festival opens possibilities for more powerful and revolutionary fights of women against misogyny. This year a lot of young women were interested in gaining new knowledge and skills about women’s rights, and I was amazed by that”, said Vildana Džekman, Project Coordinator of the CURE Foundation, adding that the festival will certainly be a strong incentive for women to make a revolutionary initiatives in their local communities. Because of this, it’s worth to look forward to the upcoming 10th PitchWiseu, which we expect next year.