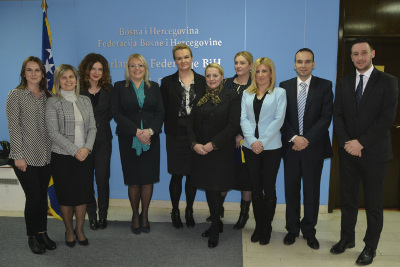 The House of Peoples of the Parliament of Federation of B&H formed the Club of Women Parliamentarians. The Club has eight members, delegates in the House of Peoples, and was constituted on 11 February 2016, with the support of the International Republican Institute (IRI).

On the Club’s constitutive session, the members adopted its Rules of procedure which is a form of organizing and action in the Parliament of Federation of B&H.

The rules of procedure determine that the members of the Club will work on affirming and promoting the social position of women, the protection of women’s, children’s and family rights, gender equality, as well as other issues that aim at improving women’s status and at addressing issues that would contribute to gender equality, better social position of women, children and the family. The Club’s members will occupy positions on other issues relevant to life in the Federation of B&H.

The Club will work within the Parliament and use the cooperation with government institutions and agencies, civil society, NGOs, international organizations, charities and citizens’ associations, foundations, the media and other similar organizations.

Lidija Bradara, Chair of the House of Peoples of the Parliament of Federation of B&H introduced the delegates to the establishment of the Club of Women Parliamentarians.