Physics as a way of life 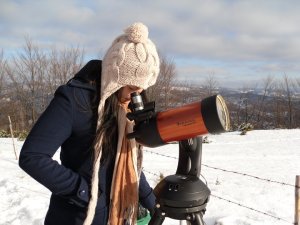 The young physicist and astronomer Adela Subašić-Kopić discovered science during the recent war in BiH. She was born in 1987, and as a child looked for the Big Dipper, the Little Bear, the North Star, the planet Venus, in complete silence, without street lights and under the open sky. She learned the basic principles of energy conversion from her dad, when he made a variety of devices, such as a bike which Adela had to ride in order to be able to listen to the radio, and later they assembled together stereos and speakers, and simple circuits, small mills.