Protest against attempts to restrict the rights of women in Spain to legal, free and safe abortion 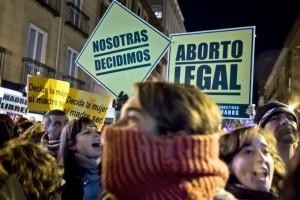 WNBiH gives full support to organizations that have raised their voice against the adoption of new legislation that would drastically restrict women’s right to abortion in Spain. At the same time, we invite the parliamentary majority in Spain to refuse the adoption of this extremely conservative law that violates women’s rights.

We can not and do not want to accept the fact that some women in Europe, in the 21st century, because of their geographical and/or social status are denied the right to free choice and access to sexual and reproductive health and rights, including the right to abortion.

Instead of making restrictive and conservative laws, we call for the authorities in Spain to respect the human rights of women, regardless of geographic area, origin or social status.

The European Parliament recently refused to accept a draft report on sexual and reproductive health and rights, prepared by Edite Estrela, whose aim was to provide high common standards to all women in all EU Member States, same rights when it comes maternity, contraception, health and sexuality.

The introduction of stricter laws on abortion does not just say no to abortion, but it is also says NO to women’s rights.

Free access to legal and safe abortion must become a fundamental right for all women in Europe!