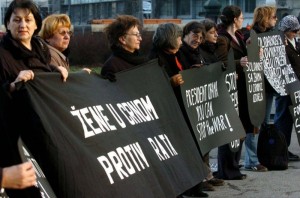 WNBIH is against the spread of violence and hatred in the name of nationalism!

Women’s Network BiH (WNBIH) strongly condemns the attack that took place last night, on 07/08/2014, when the organization “Women in Black” (Serbia) was attacked by a group of men who were extremely aggressive and violent. Activists of the NGO “Women in Black” and cyclists who rode from Belgrade to Srebrenica to commemorate the victims of the Srebrenica were attacked in Valjevo.

WNBIH supports the work of the activists who work on remembering and raising awareness about genocide in Srebrenica, because almost all politicians talk about the need to turn away from the past in a way that war crimes were suppressed, minimized or completely ignored, which makes the additional injustice to victims and their families.

This act shows that the community is not yet ready to face the past and we’re not ready to step onto the path of European integration and that the Serbian authorities have not yet learned the value of that which advocate „Women in Black“.

WNBIH requires that institutional and legal system on national and international levels demands the and calls for political elites to finally face with real problems and make efforts to respect justice and not to circumvent it.

Civil society organizations in Bosnia and Herzegovina urgently seek prosecution of this crime. We invite representatives of the international community to use all the mechanisms that protect human rights defenders and assist in the prosecution of all those who attack them.